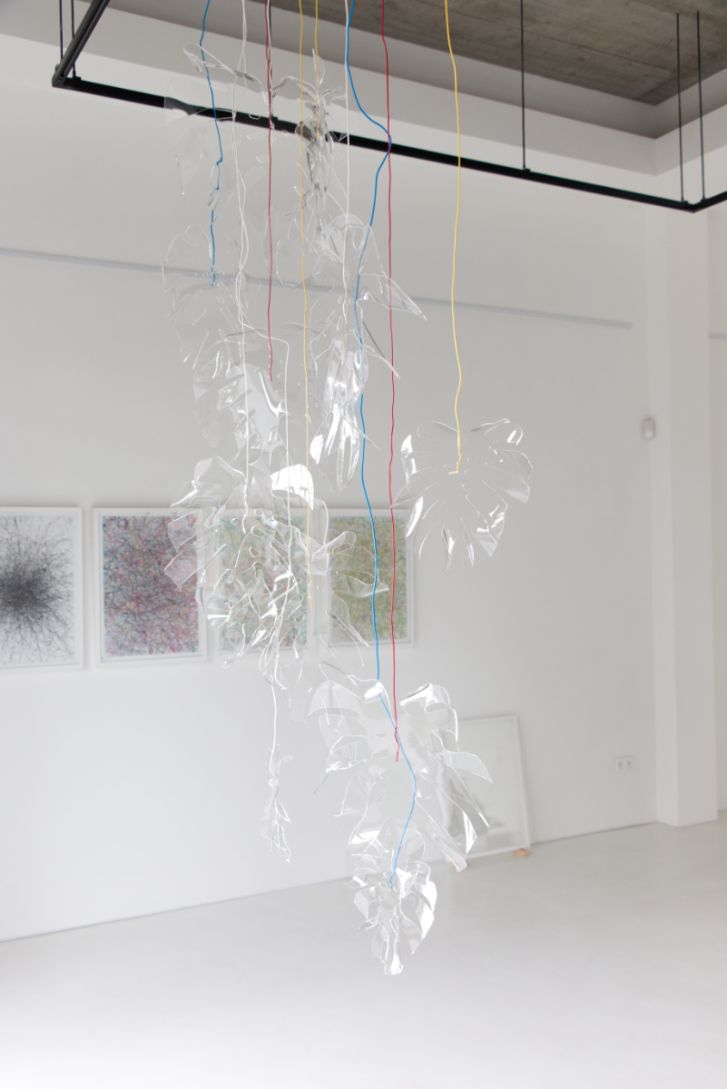 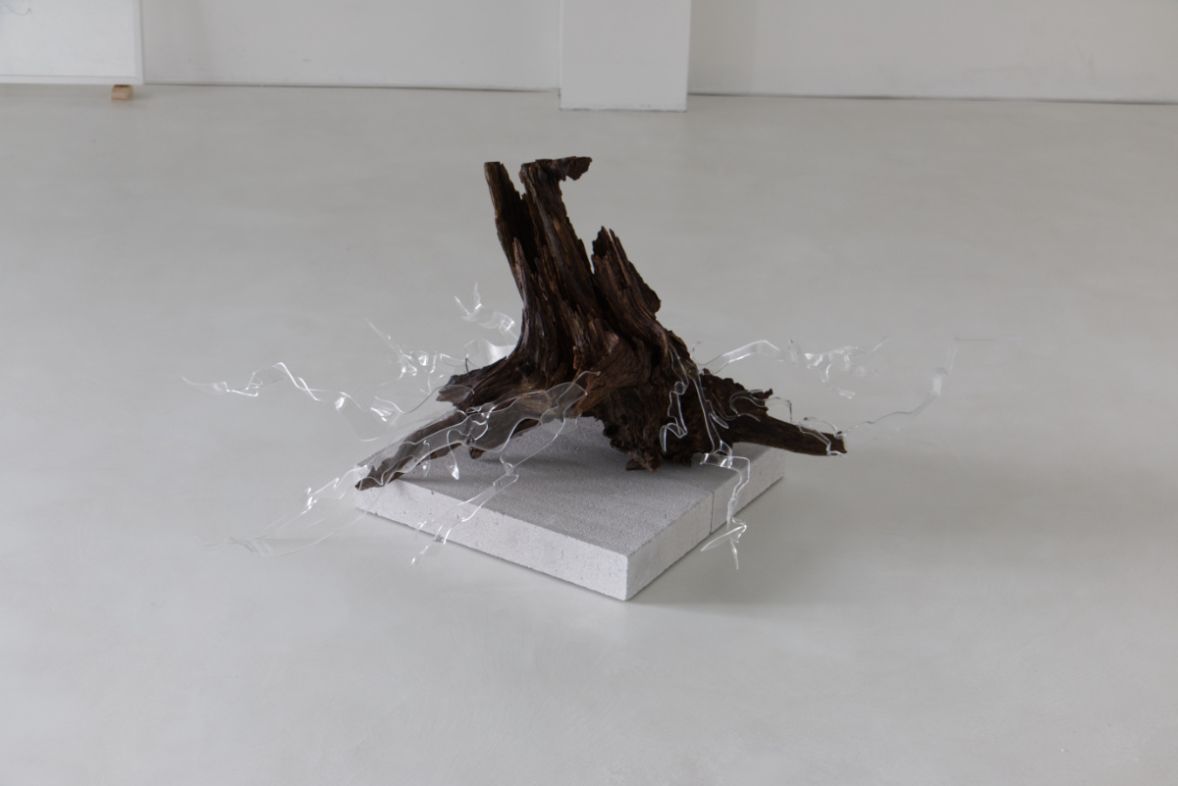 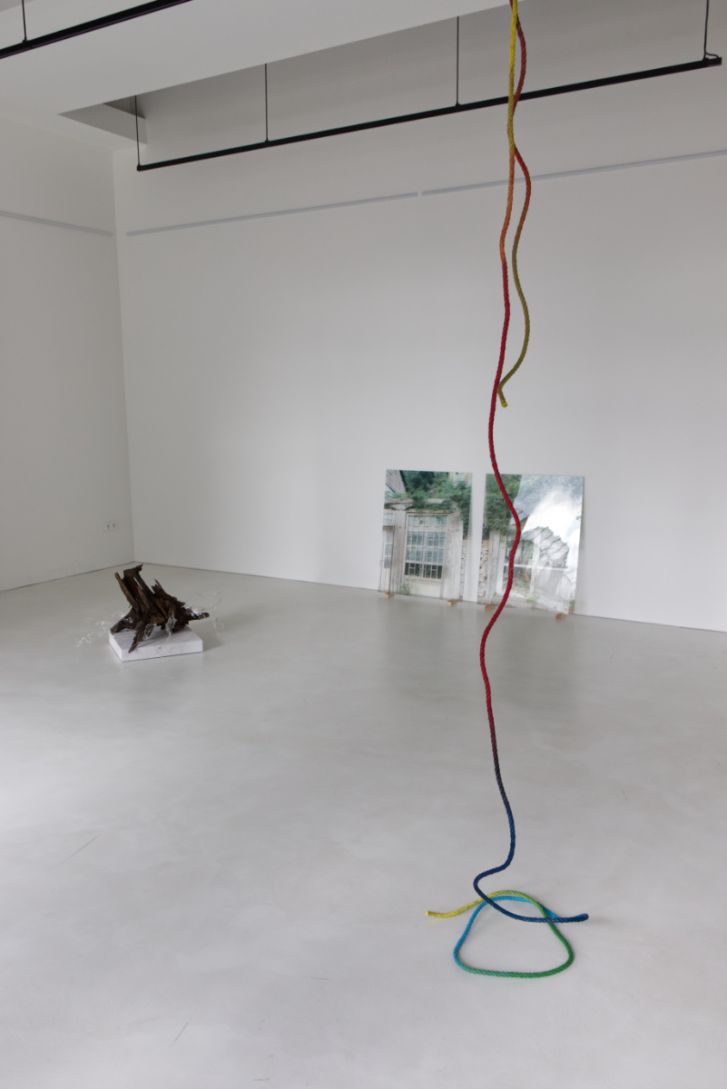 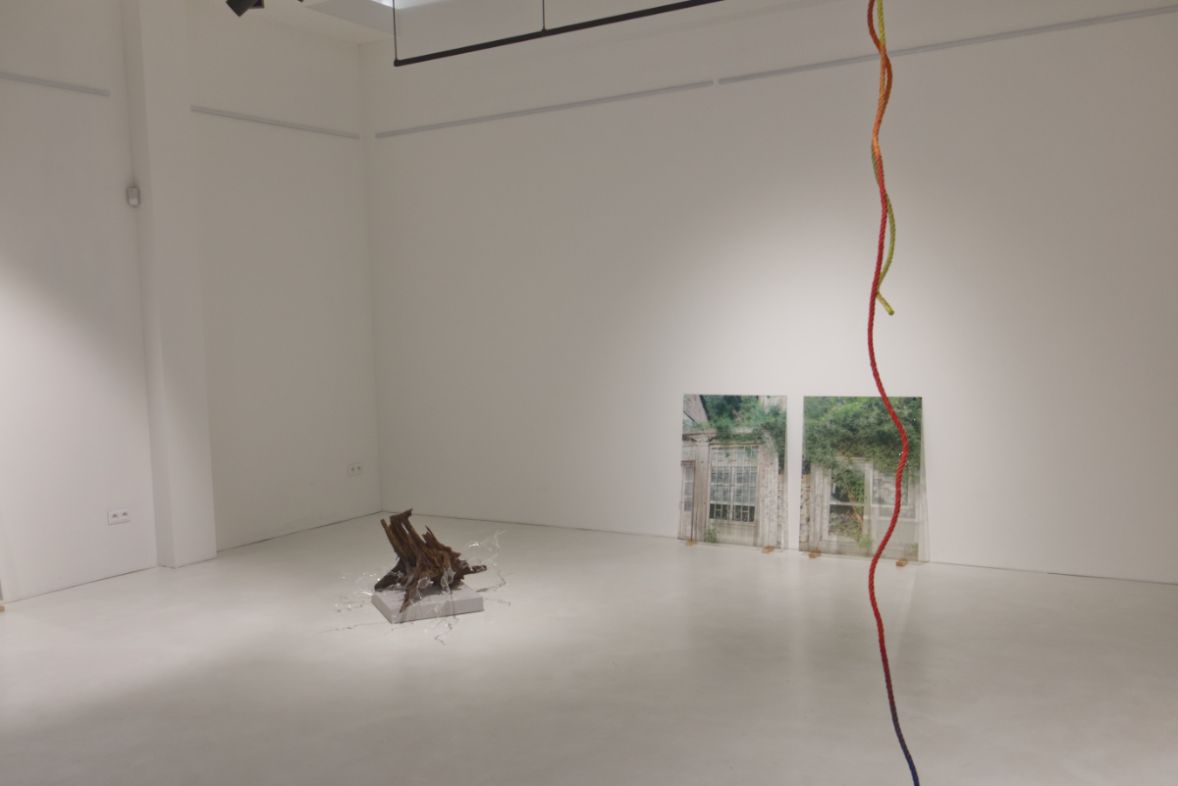 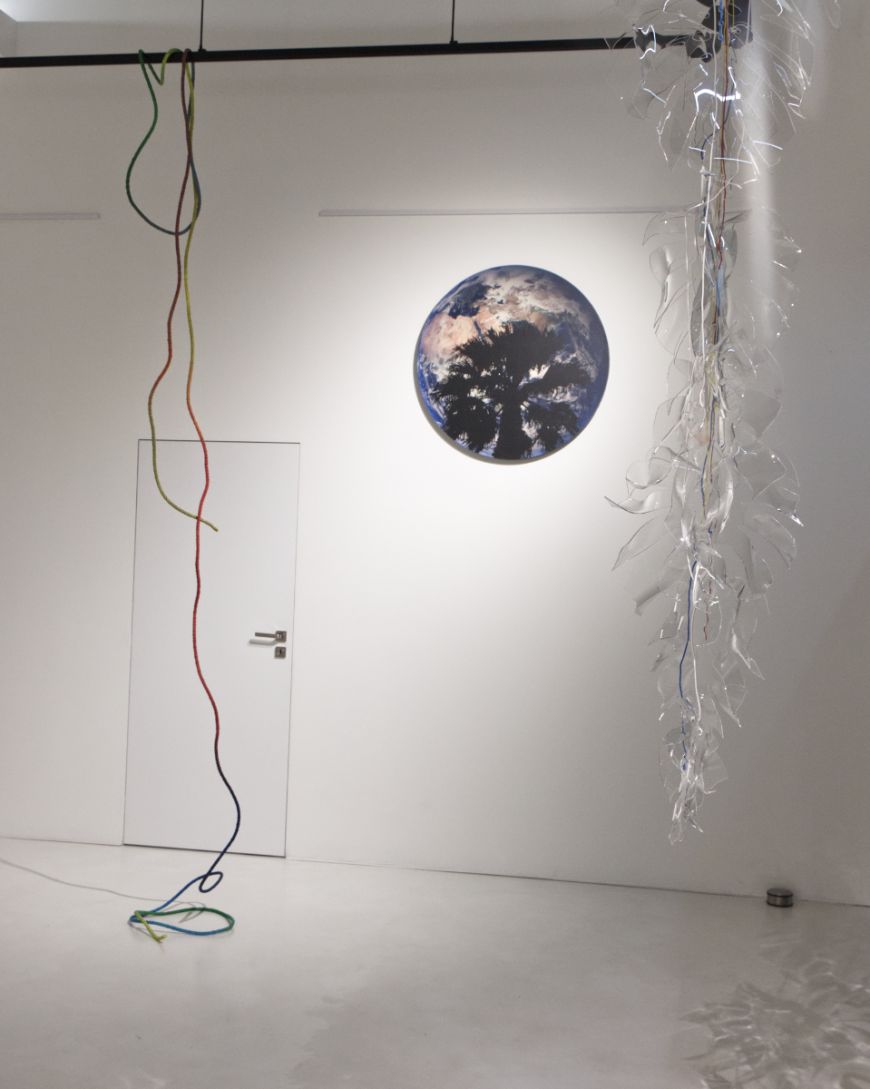 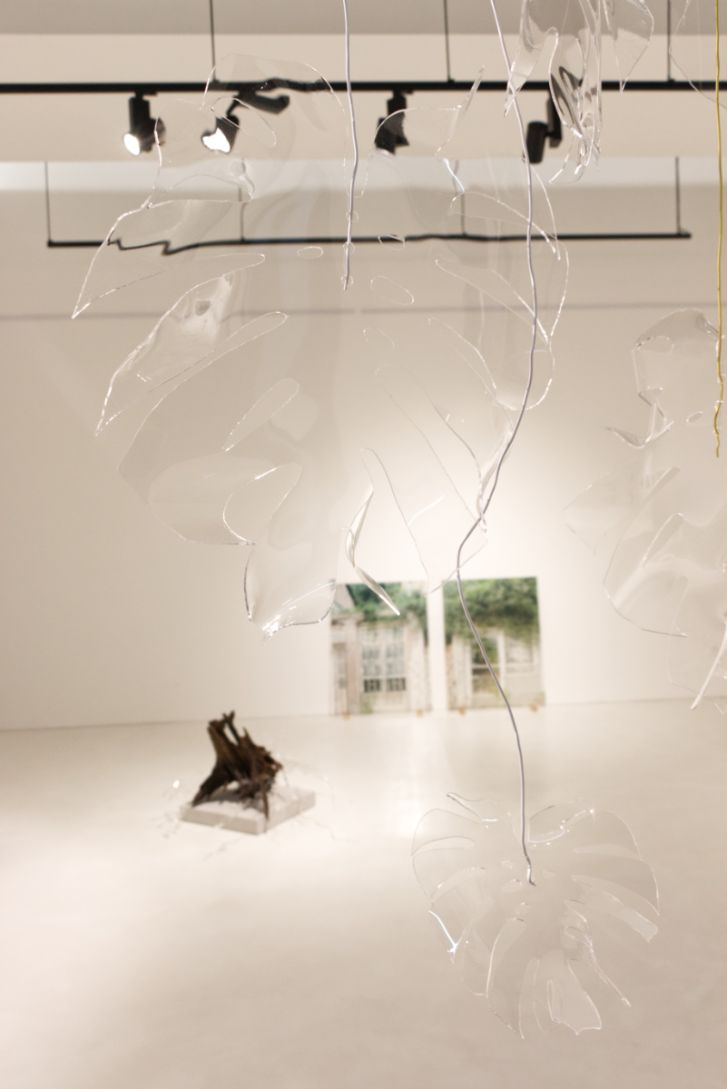 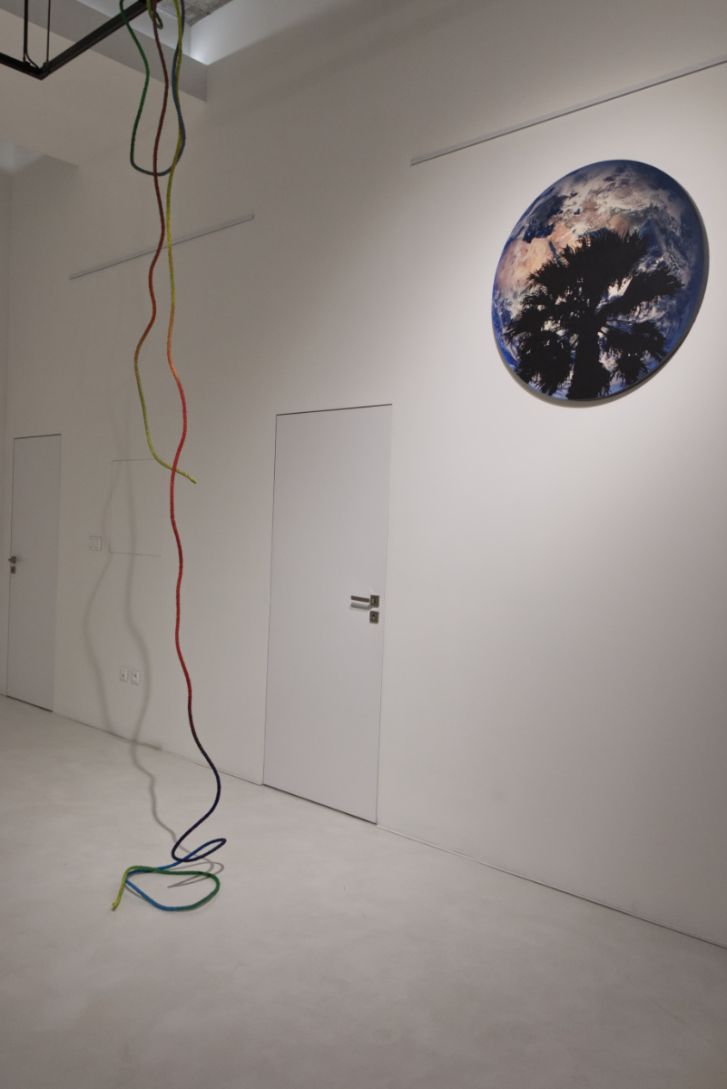 The exhibition BiosPolis projects a joint project by two artists living in Bulgaria who share affinity to work across variable media including photography, film and video, objects and painting. It is the first time the two artists are working on a collaborative exhibition.

In their recent projects both Dimitrova and Terziev employ complex parallax views that produce explosive contradictions in perspectives, maintaining an extra-orbital distance and intimate relations to materials and images imprinted in human consciousness.

The optical phenomenon of Parallax is a displacement or difference in the apparent position of an object viewed along two different lines of sight. Parallax also allows the eyes — and thence the brain — to perceive and deduce spatial information from occlusions caused by one object getting in the way of another. In other words, we can derive information from things that are unseen, obstructed, or perhaps misrecognized, as well as from those that are perceived with clarity and wholeness.

Parallax allows for the perception of both sameness and difference; it presupposes a split viewing position and the ability to process differences in perspective and perception.

Kalina Dimitrova worked with immersive installations that create a ghostlike ambience; from countless casts of bottles of water falling from the sky (More and More Waters…, 2018) to electricity cables assembled in a complex three (01100011…, 2020) or giant tumbleweed object made out of densely wooden plants and coloured cables (Tumbleweed, 2020) – all making the viewer, while being in an endless amazement, to realise the quantum entanglement between humans and everything else there is. But Kalina Dimitrova also produced large-scale drawings on paper with watercolour pencils that are rarely used with such self-assurance and visual efficiency.

In his oeuvre Krassimir Terziev has been criticizing the real immediate environment and the possibilities to analyze it. His artist‘ gaze glides over the irregularities of contemporary life, but also pushes back to unknown worlds in search of an alternative. He uses all the means of expression to penetrate deeper into the visible spectrum of things – painting, painting, video, photography, installation, sculpture. For Terziev, the different perspective turns everyday banal objects into surprising figures with the change of optics. The sharpness of vision and thought includes both aesthetic, social, and political. The author often handles real images, but neither space nor time matters. It is about deeper layers of consciousness, or weaving of the real with the fantasy.
In the case of the proposed exhibition the optical features of Parallax are overlaid and complicated with further abstractions, such as historical Parallax, or medium-related Parallax. In other words we propose an assemblage of painting, drawing, objects and moving images that do not illustrate any single topic but resonate with the anxieties and empathies of the contemporary moment.
—
Kalina Dimitrova (*1975) graduated in Mural Painting at the National Academy of Arts, Sofia in 2001. She lives and works in Sofia. Her solo exhibitions include “01100011 01101000 01110010 01101001 01110011 01110100 01101101 01100001 01110011”*, +359 Gallery, Sofia, 2020; “Bi- ophilia”, Credo Bonum Gallery, Sofia, 2020; “Hidden Life”, Gallery Gallery, Sofia, 2020; “More and more new water flows into that which have already flowed into the same rivers”, +359 Gallery, Sofia, 2018; “TheLast5Years”, Vaska Emanouilova Gallery, Sofia, 2010. Participates in numerous group pro- jects, including “Herbarium“, Sofia Arsenal-MCA, Sofia, 2021; “The Invisible. Visualizations Beyond Memory, Imagination and Simulated Reality”, Rayko Alexiev Gallery, 2020; “The image is no longer available”, ISI-Sofia, 2017; “Fragmented Stories”, Der Verein Berliner Künstler, Berlin, 2017; “Sum- mer Summery”, Credo Bonum Gallery, Sofia, 2016; “Vienna Contemporary – Focus Bulgaria”, Виена, Австрия, 2015; “Prehod for sale”, ISI-Sofia, 2014; “Who Left What behind”, “Ilia Beshkov“ Gallery, Pleven, 2012.
—
Krassimir Terziev (*1969 ) is an interdisciplinary artist whose work spans a diversity of media, including video/film, photography, painting/drawing, and text, questioning the boundaries between reality and fiction, while exploring the manifold transitions and tensions between a globalized world, dominated by overwhelming multiplicity of symbolic imagery, and its material groundings in technological, physical and human ‘hardware’.
He holds a Ph.D. in Cultural Anthropology from Sofia University (2012), where is lecturing since, and an MA degree in Painting from the National Academy of Arts, Sofia (1997), where he lectured from 2009 to 2016.
He received the Unlimited Award for Contemporary Bulgarian Art (2011), and the Gaudenz Ruf Award for New Bulgarian Art (2007).
His work is part of the collections of Centre Pompidou/MNAM, Paris; Arteast 2000+ Collection, Moderna Galerija Ljubljana; Sofia City Art Gallery, Sofia; Art Collection Telekom, Bonn; Kunstsammlung HypoVereinsbank, Munich; Gaudenz B. Ruf Collection, Zurich/Vienna; Art Project Depot, Sofia; Dana and Georgi Voynov Collection, Sofia/Bucharest; among others.

The project was implemented with the financial support of the National Fund „Culture“ under the „Mobility“ program, Bulgaria.