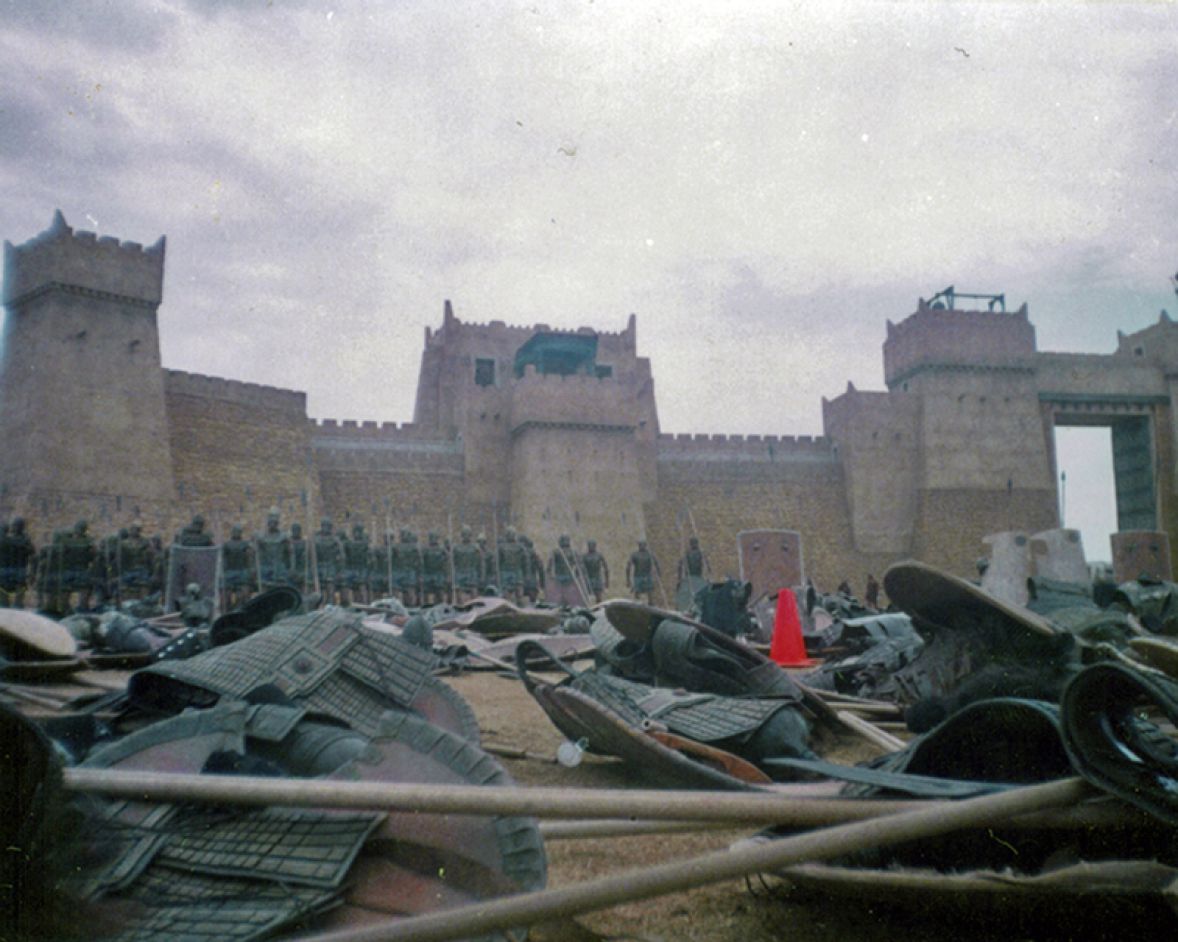 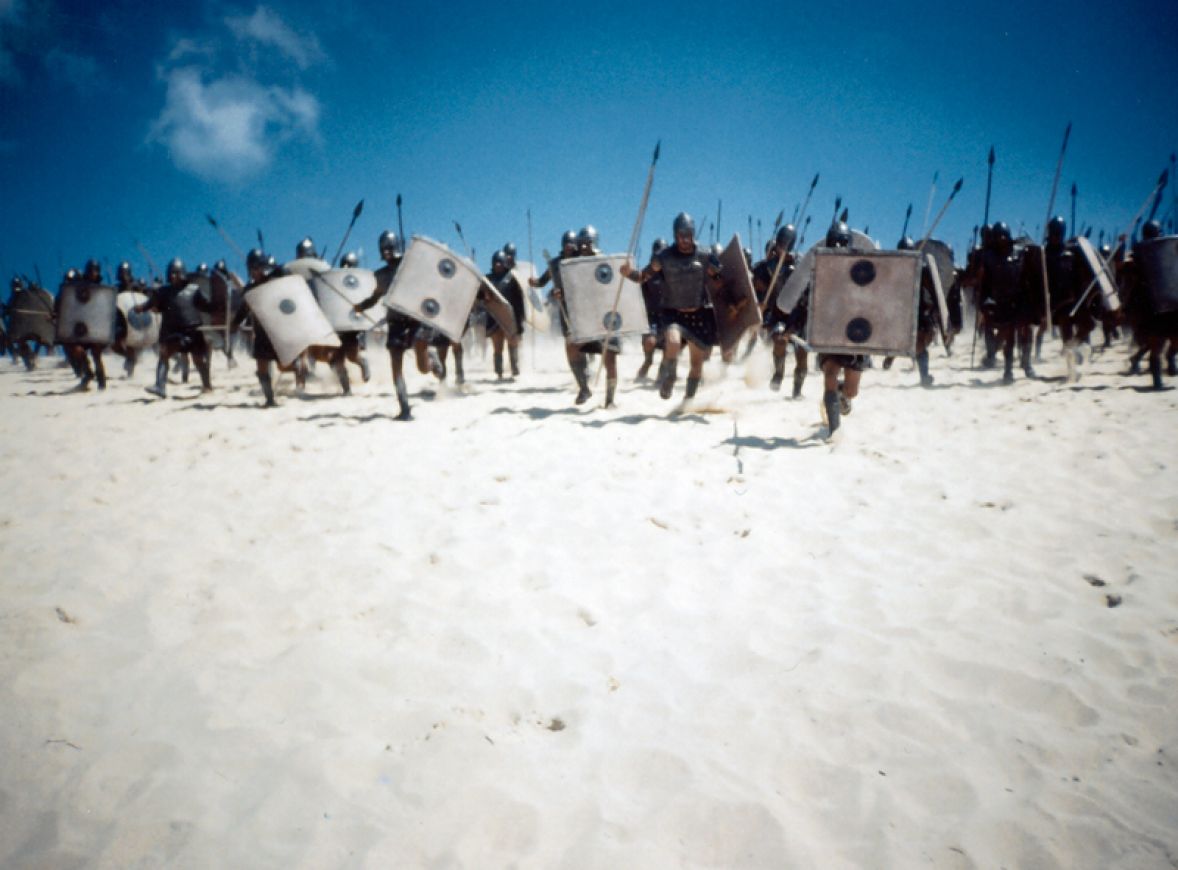 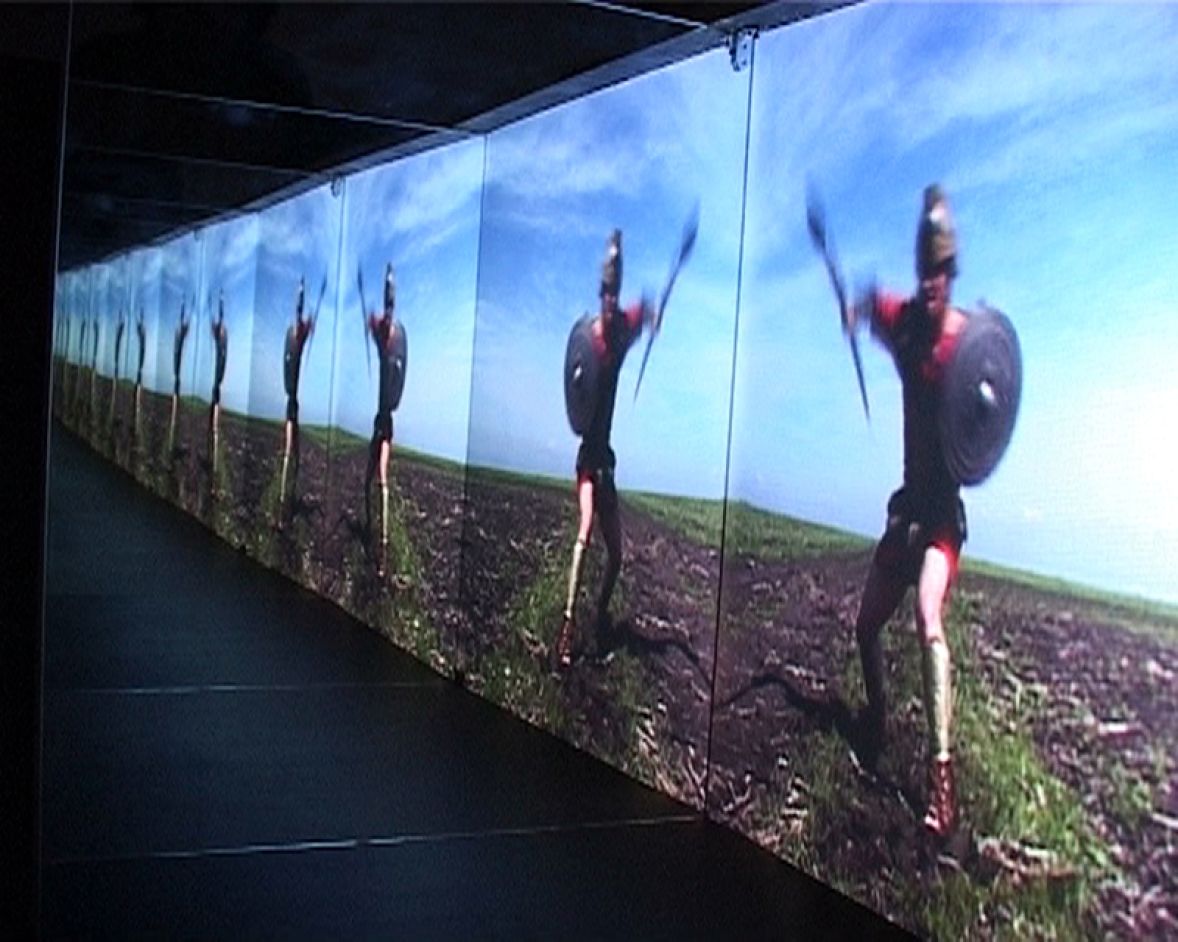 “Battles of Troy” is a study on the internal economy of contemporary globalized cinema production, see through the eyes of the lowest unit in the production hierarchy - the extras. The focus of the study is the making of the Warner Bross Motion Picture “Troy” (2004). Starting in 2003 with a budget of 185 000 000 USD, Troy is one of the most expensive productions ever made. It interprets on screen the Homer's Illiade.

The project is based on the fact that 300 people from the core “specialised” group of stunds in “Troy” are Bulgarians.The warner Bross project, executed by the British branch of the company, shot in UK, Malta and Mexico suddenly appeared to be in need of an elite group of extras that not only possessed the physical prowess necessary to convincingly stage the battle scenes, but also had a believably Mediterranean look. The perfect soldiers were recruited from the Sports Academy in Sofia, the capital of Bulgaria. On a first sight this a producer’s decision, following pragmatic and logistic reasons. A more careful study on the other hand discovers a sophisticated grid of geographic/political/cultural connotations shaping a rich field for a serious study of the word of the globalised film industry.
At first place, it is interesting to map the trajectory, drawn by the production.
Imagine the route: USA (producer), UK (staff), Malta (film shooting location), Turkey (the site of ancient city of Troy), Greece (Illiade as part of the Ancient Greece History), Bulgaria (source for the extras), Mexico (film shooting location).

Imagine a group of ~300 athletes of Bulgarian origin, collected from all-over the country to be a core of the armies in the movie Troy. For most of them this is a first close contact with the cinema world. They are coming from the Fitness Halls and the National Sports Academy – large, strong, muscled, “Meidteranean-looking” guys, close to the classical parameters for a male body (assuming that were the major criteria, the Bulgarians were chosen for this task),

And now imagine all these men, flown to the Mexican coast, where they spent 3 months in training and shooting the mass battle scenes of “Troy” as background of the feats of arms of Eric Bana and Brad Pitt.

This background behind the main characters is the subject of “Battles of Troy”.

These are people with professional backgrounds, quit remote from cinema.
It is interesting what is the motivation, that can make these “serious” men, on a serious rhitm of dayli life and training to leave the comfort of their personal lives and accept the risky 3-months trip to Mexico as a low-payed labor force in a film, in which they wont recognise even their silhouettes on the screen.

It is interesting what were the expectations, experiences and impressions of these people before and after the trip to the film-world.
What are their desires and dreams before, their frustrations and adventures during, and disappointments after the trip?
What type of transformations happened to each of the extras, leading may be to a point of no return.
What kind of movie they saw on the set during the battles shooting, and how much it matches the movie they saw in the film theater after the premiere?

These are some of the questions we try to investigate in our study.

Battles of Troy is a production of The Belluard Bollwerk International

carried out thanks to a contribution of the Canton Fribourg to the culture, with the support of Fondation Nestle pour l'Art

with the kind support of interSpace Media Art Centre, Sofia.

Special thanks to Stefan Kaegi

for aquisitions or additional information, please send email to: krassi[at]ispacemedia[dot]com